Sam Steiman has been a part of MPR for 22 years and has worked on a large portfolio of diverse projects. He spoke to us during the 2020 Safran Online User Conference about undertaking US Department of Energy (DOE) projects and how switching to Safran Risk has allowed MPR to conduct cost and schedule risk analysis faster and more effectively.

The Approval of US DOE Projects

DOE projects must go through a series of 'critical decision' (CD) gates to finally reach operational readiness. Making it through these CD gates is therefore crucial to project success. The first 3 of these stages relate to cost and schedule most keenly:

Determining a performance baseline cost is inclusive of contingency and management reserve. While both are risk-based cost elements, management reserve risk lies with the contractor and contingency risk lies with the government. As such, they're two separate risk money reserves. A successful cost and schedule risk analysis must be tuned to calculate both the government's reserves and the contractor's reserve. Traditionally this is a complex process.

Before using Safran, Sam would have to run the simulation 3 times to calculate contingency and management reserve risks. He and his team would then have to manually draw up S-curve graphs using rudimentary screenshots and image editing software.

Naturally, this wasn't ideal. His team would often receive push-back concerning why the numbers given didn't always match perfectly to the graphs provided.

Using Safran, this process is much simpler and accurate. They still run the model thrice, that's not an issue. But now the S-graphs are produced automatically, quickly, and right within the model. This saves Sam and his team unneeded effort and time.

Cost and Schedule Integration Made Easy

MPR, like many companies working on large-scale projects, were looking for a way to consolidate their cost and schedule risk analysis. This integration would spare them labour and expedite the risk analysis process.

In the past, Sam had to map cost estimates to a resource-loaded schedule manually before exporting to his cost module. This process was time-intensive and liable to data entry errors.

With Safran Risk, however, he can bring cost estimates directly into his cost module, all while mapping cost elements straight to activities for greater understanding. As Sam puts it:

"Safran makes it a heck of a lot easier to merge the cost and schedule."

For more information on how MPR make use of Safran Risk, watch Sam's full keynote from the 2020 Safran Online User Conference below: 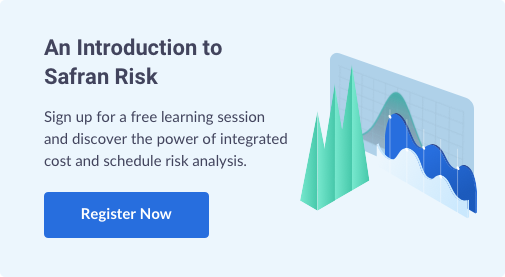 MPR Associates, founded in 1964, is a world-leading speciality engineering and management services organization based in the US. MPR's specialities lie in the commercial nuclear industry as well as governmental bodies like the Department of Energy and Defense.

To conduct cost and schedule faster and more effectively than was possible with their previous risk management software.

Safran has allowed MPR to conduct their risk analyses with greater ease and efficiency, leading to a much smoother journey from planning to execution.