For much of that time, OPRA was widely regarded as one of the best risk analysis tools available. But technology has moved on since Emerald became the platform's exclusive Canadian distributor in 2001 — as have the expectations and requirements of the world's project controls professionals.

With that in mind, I’ll be publishing a series of articles over the next few weeks that explain why I feel OPRA users should upgrade from their existing risk analysis platform to Safran Risk.

In my previous two articles, I examined the key differences between the two platforms in terms of technology and UI. Today’s article, part three, changes tack somewhat and investigates the importance of integrated cost and schedule risk analysis. And how that feature, in particular, helps to distinguish Safran Risk from the rest of the field.

Many years ago, I was hired by a large multinational oil and gas company. They were about to embark on a new technology project and my role was to conduct a schedule risk analysis in preparation for a go/no-go decision from the board. At the same time, another consultant was tasked with performing a cost risk analysis.

Billions of dollars were at stake, yet the organization in question wanted to review the results of our investigations independently. We were forbidden from discussing our findings with one another.

Nevertheless, having agreed that cost and schedule risk were intrinsically linked, we investigated ways the two analyses could be combined to provide greater insight. We narrowed down our list down to two options:

When faced with similar conundrums in the years since, the oil and gas industry has generally favored option two as the most feasible.

But what we and the industry as a whole needed was a system that would allow us to develop the two models concurrently so that the impact of uncertainties and risks related to both cost and schedule in the Monte Carlo simulations would be visible immediately.

The Problem with Segregated Risk Analysis

A recent study of Oil and Gas megaprojects in Alberta found that, on average, 19% of projects experienced cost overruns, while 17% experienced schedule overruns.

It’s no coincidence that these numbers are so closely correlated. Yet we continue to make decisions on cost and schedule mitigation strategies without clear insight into the impact changes to one is likely to have on the other. 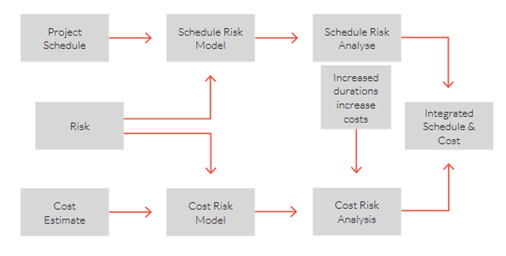 Often as project managers, we get tunnel vision. We focus too heavily on schedule or cost at the expense of the other. For example, I once worked on a turnaround project that had a budget of $120 million and a 35-day maintenance window. Management communicated that schedule was everything; cost was very much a secondary concern (so much so that it wasn’t even monitored during the project). In response, the project team started burning overtime almost from the first shift to maintain the schedule.

We completed the work on time to great fanfare. But, months later, when all the invoices were in, it was discovered that our success came at a price: $160 million, to be precise. To put it another way, we were $40 million over budget. This caused great distress within the organization. Heads rolled and the company hierarchy abandoned the “Full speed ahead, damn the torpedoes” approach from thereon in.

The ideal solution for project managers is a method that allows them to accurately gauge the likelihood of achieving both cost and schedule goals concurrently. This is known as the Joint Confidence Level (JCL) and it helps us to understand the interdependencies that link the two halves of successful project management.

OK, so now we understand why we need to conduct cost and schedule risk together. But why choose Safran Risk specifically?

Safran Risk is one of the only tools on the market that provides users with the option of evaluating cost and schedule risks together. Costs can also be modelled separately or collectively with activity durations; it’s also possible to apportion part of an estimate line item to a schedule activity while leaving the rest independent. This provides greater flexibility when modeling extant risks on a project and helps project managers avoid the frustration of trying to resource load a traditional critical path method (CPM) schedule to match cost estimates.

In addition, Safran Risk simplifies what-if analysis. While cost vs schedule risk outcomes can be mapped on a scatter plot to create a Joint Confidence Level diagram illustrating the probabilities of hitting cost and schedule targets concurrently. 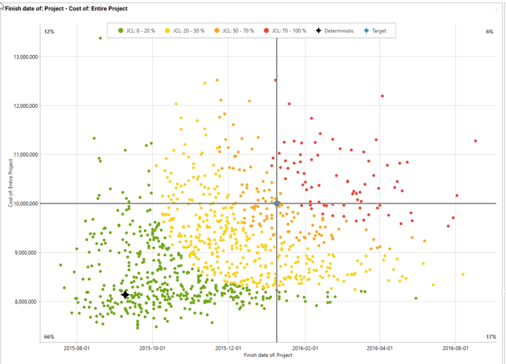 Figure 2: JCL at 70% confidence – note the deterministic cost and schedule probability (the star shape) is only 17%

With so much to offer, it should come as no surprise to learn that a recent evaluation of commercially available risk management tools boasting integrated cost/schedule risk analysis undertaken by the Energy Facility Contractors Group (EFCOG), chose Safran Risk as the best product for those working with Primavera P6, and the second best for those working with Microsoft Project.

Come back in a few days for part four of our series where I’ll be discussing the subject of analysis by exclusion. Specifically, how Safran's approach is considerably faster and more accurate than OPRA.

Aker BP has teamed up with Safran to improve its risk management analyses across all Oil and Gas...

Mitigation analysis is a massive part of the risk analysis process, and Safran Risk makes it easier...

ello, my name is Ian Nicholson, VP of Solutions at Emerald Associates.