Over the last two decades, I've worked extensively with Oracle Primavera Risk Analysis (OPRA) — or Pertmaster as it was known, before it was acquired by Primavera in 2006.

During much of that period, OPRA was considered one of the leading lights within the sphere of project risk analysis. Indeed, it remains at the forefront of the industry, even today.

To explain the reason why, I'll be spending the next few weeks examining the key differences between the two platforms to demonstrate why I believe OPRA user should upgrade to Safran Risk.

This is the second post in our ongoing series. Here, I examine the differences in user interface (UI) between the respective platforms.

In part one, I compared the technology that underpins OPRA with that utilized by Safran Risk. More specifically, I explained that the technology’s inability to support large risk models is the most common criticism levelled at OPRA. However, taking second spot on that list would be the clunky nature of the program’s user interface.

When Pertmaster (OPRA) was re-introduced as a Risk Analysis tool in 2001 — Pertmaster having been a critical path method (CPM) scheduling tool up until that time — it boasted a pretty decent user interface.

It looked like a typical CPM scheduling tool for the most part. The only exception being that it featured an extra “Risk” menu under which inputs were available, while extra items for outputs were included under the “Reports” menu. 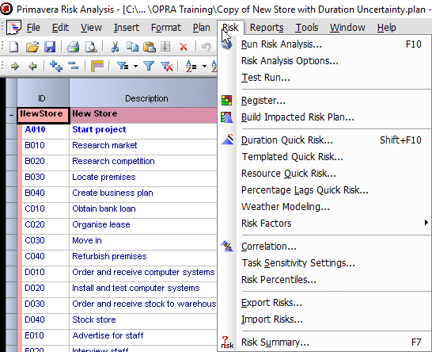 For most risk users of the time, this UI was more than sufficient because Schedule Risk Analysis (SRA) was still a relatively new and immature concept.

Performed infrequently and by relatively few people, users would gradually learn where to find the required items in the Risk and Reports menus over time. The guiding principle was, essentially, if someone could master P3 or Artemis, Pertmaster should be a walk in the park! Besides, compared to Primavera’s Monte Carlo add-on, Pertmaster offered a significant step forward in terms of usability.

Fast forward to 2020 and these deficiencies have grown into a serious pain point for project managers; especially when it comes to moving reports and layouts from one model to another in order to generate consistent outputs. Suffice it to say, the process has become nothing short of tedious. 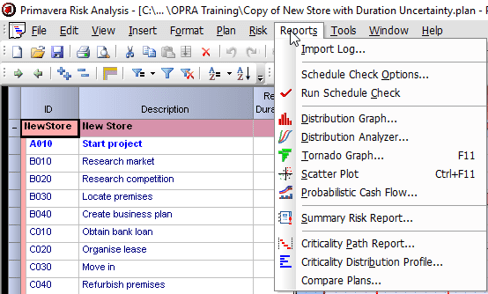 The Advantages of a Workflow-based Model

After nearly 20 years of schedule risk analysis, things have changed considerably. We now have defined risk maturity models, while organizations have made SRA part of their project management methodology and project teams routinely build their own risk models. The number of people requiring access to these systems and, more importantly, the knowledge and technical know-how to operate them effectively has grown. It’s therefore imperative that modern risk management tools employ a logical workflow.

When Safran developed Safran Risk, they pulled on the experience of the original Pertmaster developers to modernize the User Interface and make it easier for project managers to understand and learn.

The first step was to change from a menu-based input model, to a sequential, tab-based workflow system. This enables users to navigate from left to right as they build the risk model, delivering a more natural and intuitive process.

Additionally, all the functionality of Safran’s scheduling tool is available in the same application — itself one of the main advantages of building the risk engine on top of the scheduling package. Users can create layouts and filters, and share them between users and projects, simplifying the application of standard processes and reports.

Greater than the Sum of its Parts

The importance of streamlined, more ergonomic UI shouldn’t be underestimated. Not only does it streamline the process of training new users, it decreases the likelihood they’ll miss key steps when navigating a custom risk model or designing a brand-new one from scratch. Speaking for myself, I find the Safran UI makes everything a lot easier.

I still come across the occasional individual for whom the P3 interface was markedly superior to Primavera. Nevertheless, I doubt any of them would want to go back to working with P3 on a daily basis. It’s the equivalent of owning a classic sports car: you might like the idea of having a Triumph TR6 in your garage, but you wouldn’t want to drive one to work in the middle of the Canadian winter!

Join me for my next blog post where I’ll be discussing the benefits of integrated cost and schedule risk analysis.

Based on many years' experience in the planning and development of risk tools and applications,...

Correlation is often crucial to the risk model. It helps analysts understand the often-complex...