To learn more about his experience, we interviewed Jonas about his thoughts on capital project management:

Q. When did you start working on the Oslo Airport Terminal 2 Project?

A. I started working on the OSL T2 in 2011. For the first two years, I planned and constructed smaller projects in preparation for Pier North and Central Building West. We built a temporary pier with 8 gates called Pier South, in order to have enough gate capacity, before starting the construction of Pier North and Central Building West. I also worked on a two-floor bus gate and built new fire sections inside existing structures so that we could expand the building in two directions.

Today I work as a planner on the new National Museum (PNN) in Oslo.

Q. How long have you been using Safran software?

A. Back in 2011, when I started at OSL T2, I was introduced to Safran software. At first we mostly used the simple functions of Safran Planner. Given the complexity of the projects, we enjoyed being able to create different layouts and structures of the same schedule. In the middle of the Pier North project, we switched to Safran Project and a centralised database. We benefitted greatly from this, as it allowed multiple planners in the same schedule, and it was easy to create unified reports from different parts of the project.

Q. What do you find to be the major differences between large scale mega project management and that of smaller projects?

A. Two of the big differences are the amount of data you have to manage and the complexity of the building systems. To achieve good control in large projects like OSL T2 or PNN, it is more important to have a better thought-out structure for the schedule and reports, compared to on smaller projects. On mega projects, the schedule can easily become unmanageable and hard to understand if the structure doesn’t allow for different views and reports to simplify it.

Q. What are the most important changes in capital project management tools that you have seen in your career?

A. The introduction of 4D scheduling is very interesting, and we used it extensively for the structural work on Pier North. At that time, the Synchro software was still under development and gave me some headaches, but it was still very helpful. As the technology matures, I am sure it will become much more common.

Q. What do you think is the future of capital project management?

A. Machine learning and AI will likely become a part of capital project management. As planners, we deal with a lot of data and data analysis. A lot of the work we do could probably be assisted by machine learning software that collects and learns from thousands of different projects.

Q. How will your webinar help professionals improve project predictability and performance?

A. The way we have used Safran together with other software to overcome different challenges of large construction projects could be of interest. In particular, I think that 4D Building Information Modeling (BIM) is new to a lot of people. The Safran report capabilities we used on the project, will also be of value for those that do not already use those features.

During the webinar, Jonas Gran talked in detail about the OSL Terminal 2 expansion project. Professional planning was crucial on the project, since it was executed during the continuing full operations of a large international airport and involved coordinating a number of contracts.

To watch the webinar recording, follow the link below. 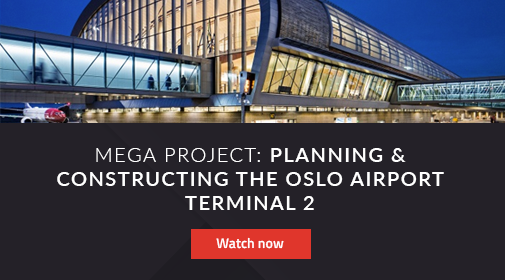